Sequels in the works for 'The Incredibles' and 'Dumb & Dumber'? 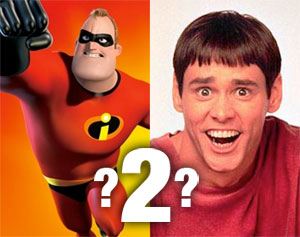 Movie sequels and remakes happen every day in Hollywood. That's not news. On the other hand, news of sequels to two somewhat beloved movies from the past 20 years? Well, that's at least worth a dual news story.

First in priority -- in my mind at least -- is the news that writer/director Brad Bird is considering a sequel to 2004's fan favorite The Incredibles. While promoting his live-action debut Mission: Impossible - Ghost Protocol, Bird told Movies.com he's willing to revisit the superhero family.

The only problem is that he hasn't yet come up with a complete story. Here's what he had to say:

"I would like to think that I have several good ideas that could be incorporated into a next Incredibles, but I don't have a whole movie yet, and the last thing I want to do is do it just because it would open big, or something like that."

Brad added that he wants to be the one in charge of the sequel. "I've told them that I'm not really friendly to have someone else take away my child," he said.

"Toy Story 2 was, to me, a perfect sequel, because it absolutely respected the first film but found new places to go without selling out its characters. So if I could come up with an idea that is to Incredibles that Toy Story 2 is to Toy Story, I would do it in a second."

Even the hint of another Incredibles, one of my all-time favs, is good enough for me.

The other rumored sequel is a follow-up to the 1994 comedy Dumb and Dumber. According to Deadline New York, writers have been hired to reunite the dimwitted Lloyd Christmas and Harry Dunne. Sean Anders and John Morris have been tasked with the script. They wrote Sex Drive and co-directed the upcoming I Hate You, Dad.

Apparently Jim Carrey has already mentioned he would be up for it. And now that Peter and Bobby Farrelly have finished The Three Stooges, they seem to be available.

Of course there was a dreadful prequel called Dumb and Dumberer: When Harry Met Lloyd in 2003. There's more hope for a sequel that has the original team, including Jeff Daniels.

Well, what do you think? Do either of these rumored sequels get you excited? Which would you like to see? Let us know.