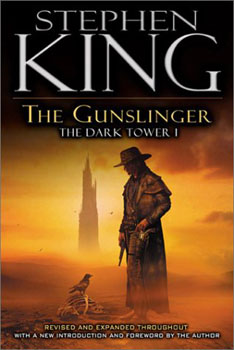 Stephen King's life-long opus "The Dark Tower" series of books is finally getting its close-up. While the speculation has long centered on whether the books would be adapted for the big screen or TV, the answer, it turns out, is both.

Deadline is reporting that Universal Pictures and NBC Universal have acquired the rights to the books and that they are turning to the Academy Award winning team of Ron Howard, Brian Grazer and Akiva Goldsman to create a trilogy of theatrical movies and a TV series.

While Ron Howard and Grazer will produce the complete movie trilogy and TV series through their Imagine Entertainment company, Howard has only committed to directing the first movie and the first season of the TV series initially. Goldsman, writer of The Da Vinci Code and A Beautiful Mind among others, will write both the movies and the TV series.

Ron Howard's decision to direct the first season of the TV series will bring his career full circle as the now successful director got his start acting on the small screen in such successful shows as The Andy Griffith Show and Happy Days. You might recall that director J.J. Abrams and his Lost cronies were attached to the project last year, so it comes as real no surprise to hear about a theatrical and TV approach.

According to Ron Howard, there really was no other way to handle the material.

"With this story, if you dedicated to one medium or another, thereâs the horrible risk of cheating material. The scope and scale call for a big screen budget. But if you committed only to films, youâd deny the audience the intimacy and nuance of some of these characters and a lot of cool twists and turns that make for jaw-dropping, compelling television."

In the spirit of full-disclosure, I'm only about 100 pages into book one, "The Gunslinger," so I'm not the best person to offer insight into casting, but I know that getting the right person to play Roland is half of the battle. Who would you cast in the soon-to-be iconic role?

There are no time frames in place, but the tone from the Deadline is that the filmmakers plan to act quickly on this.