Warner Bros. has increased the number of DVD titles which they will upgrade to Blu-ray. The studio's DVD2Blu program accepts used DVDs and exchanges them for superior Blu-rays at as little as $4.95 per disc.

New films now available for upgrading include Under Siege, Superman II: The Richard Donner Cut, Risky Business and The Lost Boys. There are now 90 films available in the promotion.

While I have yet to use the service personally, this additional assortment does make it more enticing. I do own many of the included Warner Bros. DVDs; some that I've already considered for upgrade. The question becomes: is it worthwhile? 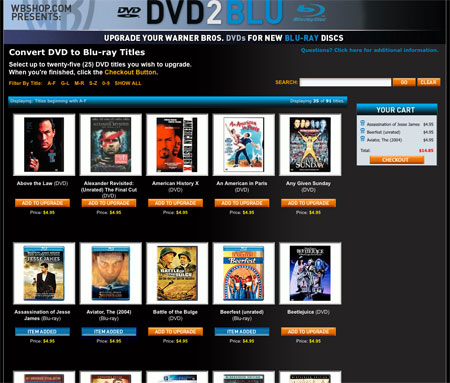 From the DVD2Blu site, I've selected these movies for improvement: The Bucket List, Body of Lies, A Christmas Story and Dumb and Dumber. The total cost with shipping is $28.75 (sales tax not included).

Let's consider other trade-in services. Amazon's buy-back program offered me $.50 to $1.50 on each DVD. They didn't even list The Bucket List as eligible. (Amazon is offering an extra $10 toward a Blu-ray purchase on trade-ins totaling $50 or more.)

Online consignment service Glyde offered to list my DVDs for sale. They promised proceeds of $.50 to a $1.00 each -- if the discs sold. Other DVD-purchasing sites I sampled had similar prices. None gave more than $2 for a DVD.

As for purchasing these Blu-rays, I checked around for the best prices online. The average cost was around $13.50 per new disc. None of the films as part of DVD2Blu are recent releases so this can be generally expected across the board.

As you can see from the table below, the cost of transitioning these old DVDs to new Blu-rays would've been twice as much using other means. And that's with a lot of comparison shopping and assuming the absolute best trade-in price.

Price aside, two notable disadvantages weigh over the DVD2Blu service. The site indicates it takes a whopping 4-5 weeks to complete the transaction. That's placing your order online, shipping your DVDs to them and then getting your new hi-def discs back -- not terribly bad considering all the steps involved.

The second detriment is that only Warner Bros. titles are included and it's a limited sampling at that. Obviously you can't expect Warner Bros. to upgrade your Disney movies for you but it something you need to be aware of.

While lots of other Hollywood studios are giving you the option to receive Blu-ray and DVD together in one new release package, it's nice that Warner provides a program to convert your existing library.

Let's hope the other studios to step aboard as well. Whether it's part of the existing DVD2Blu site or in their own initiative, Hollywood owes us something for all our years of DVD-buying history.