Photo of Nicolas Cage as Superman surfaces -- but is it real? 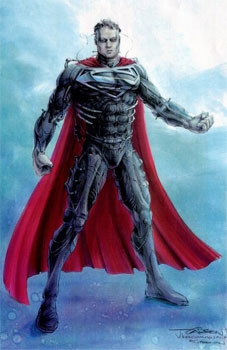 Did you ever hear the story about the Superman movie that director Tim Burton was going to do but never materialized? Yeah, well, it's a true story that had Nicolas Cage in the famous blue tights.

The story is fresh again with a surfaced photo of Nic Cage testing out the costume. Or at least so it seems.

The photo is part of a video posted by a Japanese Tim Burton fan site. The photo includes some concept art and sketches. The same site has sketches of the Brainiac villain. The Edward Scissorhands-looking art was first revealed a few years ago. This is the first supposed pre-production photo.

The Cage photo has everyone screaming fake but I thought I'd post it for what it's worth. It does seem that someone has superimposed (no pun intended) Nic's head on the photo of an action figure. It's all too plastic in appearance.

The Superman Super Site has details on this failed 1994 film project including the original screenplay by Kevin Smith.

What do you think? Is this photo a fake? Should we even care since the movie never happened? Send in your thoughts.