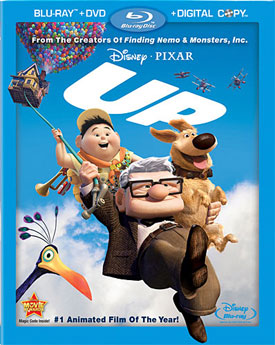 The Disney/Pixar hit animated adventure Up will land on Blu-ray and DVD on Nov. 10. The releases will include an all-new short film titled "Dug's Special Mission."

The film will be available in a four-disc Blu-ray edition and two-disc DVD. The Blu-ray version will also include a traditional DVD of the movie. Both sets will include a digital copy for play on computers and handheld devices like iPod touch and iPhone. A single-disc DVD will also be released.

In addition to the new short, the "Party Cloudly" short that played in advance of the film in theaters will be included. There's also commentary from director Pete Docter and co-director Bob Peterson. A documentary about the filmmakers' trip to South America is in the set as well.

Interestingly, alternate endings to the movie will be included on the discs. You have to wonder what will be the fate of Carl and his pint-sized companion Russell in these different takes.

According to Home Media Magazine, here are the Blu-ray bonus items:

Blu-ray exclusive extras include Cine-Explore, a visual montage that illustrates the commentary; "Geriatric Hero," a character study of the lead character Carl; Canine Companions, about the behavior of dogs and its translation to film; Russell: "Wilderness Explorer," a character study of the boy Russell; a Global Guardian Badge game, in which players try to locate countries, states and capitals around the globe enhanced by BD Live; and many others.

In other Pixar news, their hit film Monsters, Inc. will be released on Blu-ray for the first time on the same day as Up, Nov. 10.