New trailer: Mike Judge's 'Extract' (What is up with Affleck's hair and beard?) 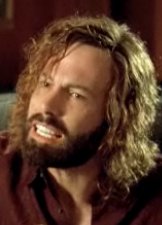 Everyone has seen -- and adores -- the director's first live-action film Office Space. Not as many of you have watched his follow-up Idiocracy. It's very much worth a look. (That's your cue to go rent the DVD.)

His latest comedy, Extract, has him venturing back to the workplace. The first trailer for the film popped up online today. You can watch it below.

My first reaction to this trailer was "What is up with Ben Affleck's hair and beard?" He looks like Kenny Loggins' illegitimate brother.

The next thing I noticed was it's similarity to Office Space. Jason Bateman's role is an everyman similar to Peter Gibbons (Ron Livingston). I guess that puts Kenny Loggins Jr. in the wacky buddy role originally played by Diedrich Bader. Mila Kunis is Jennifer Aniston... and so on.

Despite its clone appearance, I'm not ready to pass Judgement -- see what I did there? I'm dying to see this one when it hits theaters on Labor Day weekend.

What do you think? Do you share my Mike Judge bromance? Are you looking forward to Extract? Doesn't it seem modeled after Office Space? Let us know.