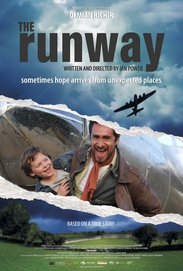 In this charming comedy, Oscar-nominee DemiÃ¡n Bichir (A BETTER LIFE, "Weeds") stars as Ernesto, a Colombian pilot whose plane has crashed in a small Irish village. Not able to speak a word of English, a precocious 9-year old boy named Paco, the only one in his town who knows Spanish, becomes his translator. Rewriting Ernesto's mysterious and questionable past, Paco turns him into a hero and a celebrity, motivating the entire town to rally behind Ernesto to help rebuild his plane. When a seedy Colombian detective arrives and threatens to reveal a dark secret about Ernesto, the town begins to question who they can trust. Inspired by true events, THE RUNWAY tells the story of a boy needing a father, a man wanting a family, and a town willing to do anything for a hero.