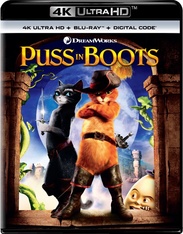 You loved him in Shreknow see where the one-and-only swashbuckling feline found his fame  and a very big pair of boots  in the "hilariously funny" (Associated Press) animated epic! Lover, fighter and outlaw Puss In Boots (Antonio Banderas) is off on the adventure of his nine lives as he teams up with Kitty Softpaws (Salma Hayek) and Humpty Dumpty (Zach Galifianakis) for the ultimate showdown with the notorious Jack and Jill (Billy Bob Thornton, Amy Sedaris). Here's the true story of The Cat, The Myth, The Legend  Puss In Boots!

Rated PG for some adventure action and mild rude humor.