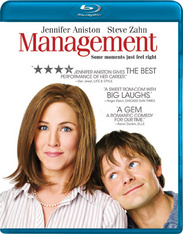 MANAGEMENT is a romantic comedy that chronicles a chance meeting between Mike Cranshaw (Steve Zahn) and Sue Claussen (Jennifer Aniston). When Sue checks into the roadside motel owned by Mike's parents in Arizona, what starts with a bottle of wine "compliments of MANAGEMENT" soon evolves into a multi-layered, cross-country journey of two people looking for a sense of purpose. Mike, an aimless dreamer, bets it all on a trip to Sue's workplace in Maryland  only to find that she has no place for him in her carefully ordered life. Buttoned down and obsessed with making a difference in the world, Sue goes back to her yogurt mogul ex-boyfriend Jango (Woody Harrelson), who promises her a chance to head his charity operations. But, having found something worth fighting for, Mike pits his hopes against Sue's practicality, and the two embark on a twisted, bumpy, freeing journey to discover that their place in the world just might be together.