The Adventures of Tintin 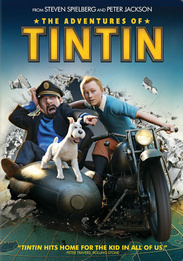 Based on the internationally beloved and irrepressible characters created by HergÃ©, the story follows the unquenchably curious young reporter Tintin (Jamie Bell) and his fiercely loyal dog Snowy as they discover a model ship carrying an explosive secret. Drawn into a centuries-old mystery, Tintin finds himself in the sightlines of Ivan Ivanovitch Sakharine (Daniel Craig), a diabolical villain who believes Tintin has stolen a priceless treasure tied to dastardly pirate named Red Rackham. But with the help of his dog Snowy, the salty, cantankerous Captain Haddock (Andy Serkis) and the bumbling detectives Thompson & Thomson (Simon Pegg and Nick Frost), Tintin will travel half the world, outwitting and outrunning his enemies in a breathless chase to find the final resting place of The Unicorn, a shipwreck that may hold the key to vast fortune . . . and a ancient curse.