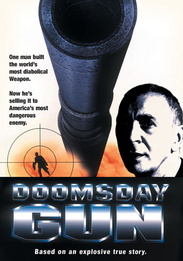 In this tense, explosive thriller, Frank Langella is Gerald Bull, a scientist and arms specialist with one obsession: building the world's most powerful weapon. He doesn't care who pays for it. He doesn't care who uses it. All he wants is to see his masterpiece created. Bull soon finds a customer for his Supergun: Iraqi leader Saddam Hussein. But in order to avoid the arms embargo in operation against Iraq, he orders parts from factories around the world and organizes teams of engineers in secret locations. As Bull designs and builds his dream, the world watches. American CIA agents (Kevin Spacey and Tony Goldwyn) are following his every move, while the British Secret Service (James Fox and Rupert Graves) keep a close eye on events, yet no one seems prepared to stop Bull's insane plan. Now a brilliant inventor and his deadly machine are caught in a tangled web on international intrigue. Only a lonely Israeli spy (Alan Arkin) seems willing to do whatever it takes to prevent the destructive force of this devastating Supergun from being unleashed upon the world... but time is running out.