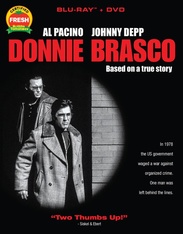 In the name of justice, Joe Pistone leaves his family behind and takes on the persona of a gangster, Donnie Brasco, who must prove his absolute loyalty and willingness to commit crimes to be accepted into a mob family. To gain greater access, Donnie gains the confidence of Lefty Ruggiero. However Donnie is unable to distance himself emotionally from Lefty's friendship. As he tries to balance his undercover role, his real-life family, and his friendship with Lefty, Donnie Brasco's loyalties and spirit are put to the test.