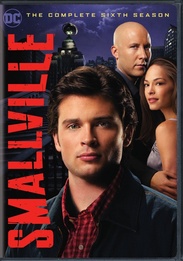 They tried to be friends. But their chosen paths set them on a collision course. The Clark Kent-Lex Luthor rivalry explodes into the fierce good- versus-evil battle fans have long expected in Season 6 of the spectacular series that reinterprets the characters and events of Superman mythology from its roots. Adding to the rivalry: Lana Lang becomes Mrs. Luthor. Clark/Superman wou ld be stunned to find out why she says yes. But thats not all thats stunning. Green Arrow forms a Super Hero league. Will Clark join? Phantom Zone escapees menace Earth. Can Clark stop them? LuthorCorp expands its dark experiments. Will an awesome kryptonite-powered army be the result? The answers and thrills are here!