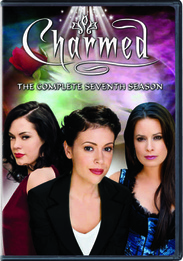 Follow the Charmed Ones, Phoebe (Alyssa Milano), Piper (Holly Marie Combs) and Paige (Rose McGowan), on their suspenseful adventures of the supernatural! In Charmed: The Complete Seventh Season, the magical Halliwell sisters are called to travel back in time, protect the Innocents from the deadly demon Sarpedon, and keep Zankou from claiming the powerful Book of Shadows. Join the Charmed Ones in the ultimate battle of impending doom when the almighty Avatars from ancient Egypt plot to vanquish anyone who threatens their Utopian transformation of the world! Charmed: The Complete Seventh Season is filled with pure excitement, romance and mystical thrills. The Power of Three has never been better!