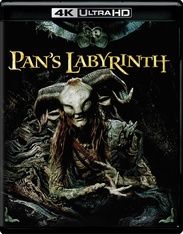 From acclaimed director Guillermo Del Toro comes a dark supernatural epic about the battle between good and evil. When young Ofelia and her mother go to live with her new step-father on a rural military outpost, she finds herself in a world of unimaginable cruelty. Soon Ofelia finds the creatures of her imagination in which she used to escape have become a reality and she must battle them to save both her mother and herself. In the terrifying battle that ensues, Ofelia soon learns that innocence has a power that evil cannot imagine.

Rated R for graphic violence and some language.