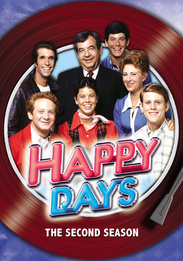 Happy Days was set in the 1950s in Milwaukee, the heart of middle-class America, and told the story of the Cunningham family. Mr. Cunningham (Tom Bosley) ran the local hardware store and Mrs. Cunningham (Marion Ross), like all good TV Moms, spent her time in the kitchen. Their son, Richie (Ron Howard), hung out at Arnold's Drive-In with his pals Ralph Malph (Donny Most) and Potsie (Anson Williams), trying to be as cool as the coolest greaser in town, the Fonz (Henry Winkler). Richie's sister, Joanie (Erin Moran), tagged along whenever she wasn't at her friend Jenny Piccolo's house. The Cunninghams also had an older son, Chuck, but he mysteriously disappeared after the first season.