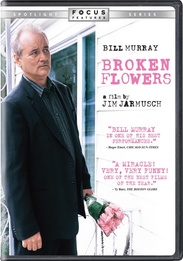 Bill Murray stars in the comedic story of an aging Don Juan who hits the road on a revealing and humorous cross-country journey.

When a mysterious pink letter informs Don Johnston that he may have a 19-year-old son, he travels to the homes of four former lovers, where he comes face-to-face with the errors of his past and possibilities of his future

Rated R for language, some graphic nudity and brief drug use.