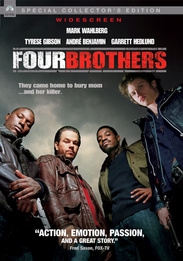 A gripping tale of brotherly love, betrayal, and revenge from acclaimed filmmaker John Singleton. After their adoptive mother is gunned down during a grocery store holdup, the estranged brothers reunite to seek revenge and take matters into their own hands. Defying police orders, the four begin turning their old Detroit neighborhood upside down searching for the mastermind behind the brutal killing. Along the way, they discover they are bound by ties thicker than blood in this emotionally powerful, action-packed drama. Mark Wahlberg, Tyrese Gibson, Andre Benjamin and Garrett Hedlund star.