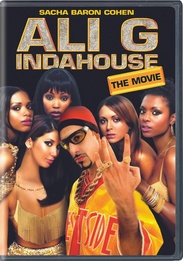 Ali G (Sacha Baron Cohen), HBO's hottest comedy sensation, stars in his side-splitting, outrageously funny feature film debut - Ali G Indahouse! The hip-hopping, white gangsta-rapper wannabe gets entangled in the evil Chancellor's plot to overthrow the Prime Minister of Great Britain (Michael Gambon, Harry Potter and the Prisoner of Azkaban). But, instead of bringing him down, Ali G is embraced by the nation as the voice of youth and "realness," making the Prime Minister and his government more popular than ever.