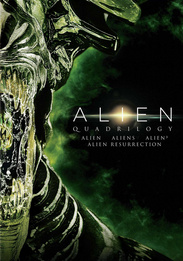 On its way back to Earth, a spacecraft is re-routed to a remote planet to investigate a distress call. When a member of the landing party returns to the ship as the unwilling host of a seemingly indestructible extraterrestrial creature that bleeds acid, the crew must destroy the alien before it kills them all. Tom Skerritt, Sigourney Weaver, Ian Holm, Veronica Cartwright, Harry Dean Stanton, Yaphet Kotto, and John Hurt star in Ridley Scottâs classic mix of horror and sci-fi. Theatrical version; 117 min./2003 directorâs cut: 116min. C/Rtg: R

James Cameronâs action-packed sequel finds Ripley (Sigourney Weaver) accompanied by a platoon of space marines as she reluctantly returns to the planet where her crew discovered the alien. But their mission to rescue a group of colonists turns into a desperate battle for survival as they find themselves up against an entire hive of the lethal creatures. Michael Biehn, Paul Reiser, Bill Paxton, Lance Henriksen also star. Theatrical version; 137 min./1991 extended version; 154 min. C/Rtg: R

In the third installment in the hit sci-fi series, Lt. Ripley (Sigourney Weaver) crash-lands on a bleak prison planet inhabited by male criminals, killers, and rapists. With no weapons of any kind, Ripley and the inmates will have to find a way to kill a new breed of alien that has begun to terrorize their colony. With Charles S. Dutton, Charles Dance, and Lance Henriksen; directed by David Fincher (his feature film debut). Theatrical version; 115 min./2003 extended version; 144 min. C/Rtg: R

Theyâve brought her back from the dead...but they didnât bring her back alone. Sigourney Weaver stars as the newly cloned Ellen Ripley, a mix of human and alien DNA. Trapped on a giant spaceship overrun with aliens, Ripley joins with a group of mercenaries in an effort to escape before the vessel collides with Earth. Director Jean-Pierre Jeunetâs ("The City of Lost Children") contribution to the sci-fi series also stars Winona Ryder, Ron Perlman, Brad Dourif, and Michael Wincott. Theatrical version; 109 min./2003 extended version; 116 min. C/Rtg: R