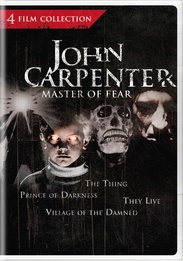 Possessed by an ominous creative vision and a chilling ability to keep audiences guessing until the very end, director John Carpenter is justifiably known as the Master of Fear for his body of mind-altering horror films that helped introduce the slasher genre to American audiences. The John Carpenter: Master of Fear Collection, featuring The Thing, Prince of Darkness, They Live and Village of the Damned, delivers all the shocks, suspense and sinister twists fans have come to expect. Dare to enter the world of John Carpenter: it's a journey to the dark side of humanity that you wont soon forget... The Thing: In the winter of 1982, a twelve-man research team at a remote Antarctic research station discovers an alien buried in the snow for over 100,000 years. Soon unfrozen, the form-changing alien wreaks havoc, creates terror and takes on the appearance of those it kills. They Live: Aliens are gaining control of the earth by masquerading as humans and lulling the public into submission. Humanity's last chance lies with a lone drifter who stumbles upon a unique pair of sunglasses that reveal the terrifying and deadly truth. Prince of Darkness: A group of graduate students and scientists uncover an ancient canister and inadvertently unleash a strange liquid from it. As the substance turns their co-workers into zombies, the remaining members realize they have released Satan himself. Village of the Damned: After an unseen force invades a quiet coastal town, ten women mysteriously find themselves pregnant. A local physician and a government scientist join forces when the women simultaneously give birthand the reign of terror begins.

Prince Of Darkness
They Live
The Thing
Village of the Damned