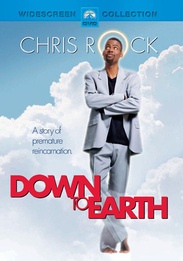 A young black comedian is rising to stardom only to have his life come to a premature end. His guardian angel pulled him out of his body a second before the accident and inadvertantly killed him before his time. In order to rectify the situation, they put him back on Earth someone else's body, a rich, old white dude. Now the young black comic needs all his talents to make the best of the situation he finds himself in.

Rated PG-13 for language, sexual humor and some drug references.