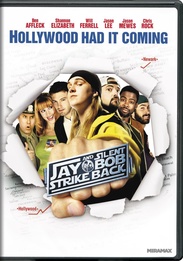 Jay and Silent Bob find out that Miramax, thanks to their old bud Banky Edwards, is making a feature film adaptation of their comic book alter egos, Bluntman and Chronic. Not only that, but they aren't getting their share of the profits and some losers on the Internet are bad mouthing their "good names." They decide to set out from Red Bank, New Jersey and head to Hollywood to put an end to this movie once and for all. Along the way, the drug-peddling duo run into all sorts of interesting and misguided individuals.