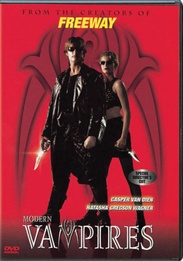 Welcome to Transylvania in the Hollywood Hills. When a mysterious vampire (Natasha Gregson Wagner) shows up in LA, the Count wants the blood-sucking seductress eliminated before her rampage of death exposes the underground church of damnation. Her only chance at immortality lies in the fangs of Dallas (Casper Van Dien). Also starring Kim Cattrall, Natasha Lyonne, Craig Ferguson and more.