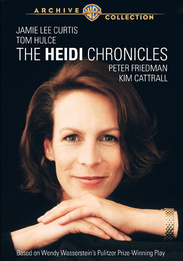 The reviews are in - and Heidi has taken the critics and the public by storm! Critics across the nation praise this adaptation of Wendy Wasserstein's Pulitzer-Prize winning play about one woman's quest for fulfillment. Jamie Lee Curtis (True Lies) stars as Heidi Holland, and idealistic member of the baby-boom generation navigating her way through the excitement and turmoil of the 1960s, '70s, '80s and '90s. Tom Hulce (Amadeus) and Kim Cattrall (Sex and the City) costar in this humorous, moving story of four friends, three decades, two sexes and one woman who has come a long way...maybe.