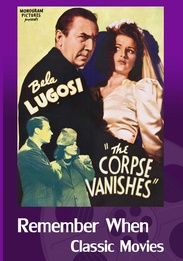 The Corpse Vanishes is a 1942 American mystery and horror movie starring Bela Lugosi. On the day of Alice Wentworth's (Joan Barclay) wedding, mad scientist Dr. Lorenz (Bela Lugosi) sends the bride an unusual orchid, the scent of which places the young woman in a suspended state resembling death. Dr. Lorenz spirits Alice's body away to his basement laboratory in his isolated mansion where he extracts glandular fluid from behind her ears to inject into his vain and aged wife in order to renew her youth and beauty. This is only one of a series of young brides who appear to die at the altar, and whose corpses vanish en route to the hospital or morgue, and the police are totally baffled by these events. A young journalist, Patricia Hunter, (Luana Walters), investigates the case and discovers an unusual orchid. She is directed to Dr. Lorenz, a known expert on orchids and visits his mansion. There she meets a chilly reception from Lorenz's wife, and is forced to spend the night when a storm washes out the bridge to town. To Patricia's horror, she discovers the cellar beneath the mansion where two crazed assistants of Dr. Lorenz are helping the doctor, and she also discovers a mausoleum in which he keeps the bodies of the bride-victims, not all of whom may be entirely dead yet. Patricia leaves the next day and with the help of her editor develops a plan to trap Dr. Lorenz with a staged wedding and lots of police protection. More bizarre events are yet to occur, but you must watch this classic Lugosi horror to see what becomes of the crazed doctor and his assistants. This is a spectacular movie for any horror cult classic enthusiast. Another brilliant and timeless Lugosi film!