The Americanization Of Emily 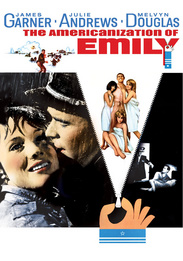 Julie Andrews and James Garner star in a black comedy about honor, cowardice and unexpected heroism written by Paddy Chayefsky. Stationed in London during World War II, American Lieutenant Commander Charles E. Madison (Garner) has become an expert in avoiding hazardous duty. But he falls in love with an English widow (Andrews) who has lost her husband and most of her family to the war--and who selflessly believes in duty and country. And then Madison is chosen to be the first Allied soldier to land on the beach at Normandy on D-Day, an honor that no one expects him to survive.