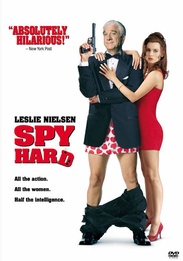 Leslie Nielsen is agent WD-40, a.k.a. Steele, Dick Steele, in Spy Hard, a comedy of high-voltage adventure, high-tech gadgetry, and lowbrow humor. Steele, lured back to active service by the agency's director is the only man who can stop the evil General Rancor. Rancor, a malevolent madman presumed dead after losing two limbs in an explosive altercation with Steele fifteen years earlier, is alive. He's mad as hell, unarmed, but still dangerous, and Steele is the only man who can get a leg up on him to stop him. Steele joins forces with the mysterious and beautiful Agent 3.14 to thwart his old nemesis' diabolical scheme for global power. Together they elude Rancor's henchmen, escape speeding vehicles, evade kidnap attempts as they make their way to General Rancor's lair.