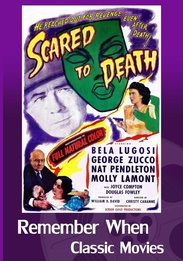 Scared to Death is a 1947 Gothic film starring Bela Lugosi. This is the only color film in which Bela Lugosi had a starring role, and is based on an actual 1933 murder case. The film begins with a disclosure by morgue examiners of how a beautiful woman literally died of fright and the plot reveals how she reached that fatal stage of terror. A woman is married to the son of a doctor who is the proprietor of a private sanatorium where the woman is undergoing unwilling treatment. Both son and doctor indicate they want the marriage dissolved. Then enter a mysterious stage magician from Europe, identified as the doctor's cousin, Bela Lugosi. Lugosi is accompanied by a threatening person (Angelo Rossitto). The institutionalized woman is terrified of the foreigners and it is disclosed that she is the former stage partner of a Paris magician known as Rene who was believed to have been shot by the Nazis. Attempts to make the woman confess that she betrayed her husband and had collaborated with the Nazis leads to a device known as the 'death mask' which literally frightens the woman to death. Although, a newspaperman and his sweetheart guess the answer to the story they allow the diagnosis 'scared to death' to stand. This is a rare treat of a film featuring the world- famous, Bela Lugosi, and is a classic among classics!