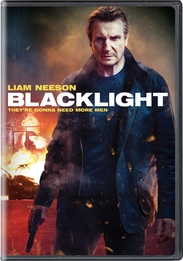 In the tense action thriller BLACKLIGHT, LIAM NEESON stars as Travis Block, a freelance government operative living on the fringes and coming to terms with his shadowy past. When he discovers an undercover team thatâs targeting U.S. citizens, Block finds himself in the crosshairs of the FBI director (AIDAN QUINN) he once helped protect. But as Block attempts redemption by enlisting a journalist (EMMY RAVER-LAMPMAN) to get the truth out, his daughter and granddaughter are threatened â and a danger that has existed on the margins.