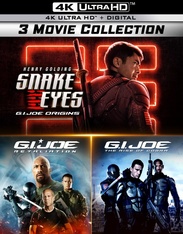 G.I. Joe: The Rise of Cobra
Based on Hasbro's immensely popular action figures, G.I. Joe is the ultimate elite fighting force, engaged in an extraordinary action-adventure matchup of good versus evil! In G.I. Joe: The Rise of Cobra, the G.I. Joe team, armed with the coolest hi-tech gadgets and weapons, travels the world from the Egyptian desert to the polar ice caps in a high stakes pursuit of Cobra, an evil international organization threatening to use a technology that could bring the world to its knees.

G.I. Joe: Retaliation
In this sequel, the G.I. JOE team is not only fighting their mortal enemy COBRA; they are forced to contend with threats from within the government that jeopardize their very existence.