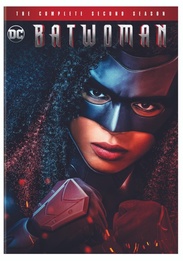 Season 2 kicks off with a gamechanger that alters Gotham and Team Bat forever. A new hero emerges from the shadows. Relatable and messy, Ryan Wilder couldnt be more different than the woman who wore the Batsuit before her. Feeling trapped and powerless by the system, Ryan believes the Batsuit is the key to breaking out of it. But its not the suit that makes her powerful, its the woman inside.