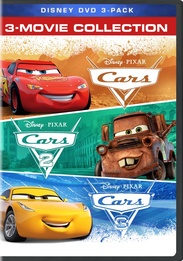 Cars
From the acclaimed creators of TOY STORY, THE INCREDIBLES, and FINDING NEMO comes a high-octane adventure comedy that shows life is about the journey, not the finish line.

Hotshot rookie race car Lightning McQueen (Owen Wilson) is living life in the fast lane until he hits a detour on his way to the most important race of his life. Stranded in Radiator Springs, a forgotten town on the old Route 66, he meets Sally, Mater, Doc Hudson (Paul Newman), and a variety of quirky characters who help him discover that there's more to life than trophies and fame.

Revved up with a sensational soundtrack, featuring Rascal Flatts, Sheryl Crow, John Mayer, James Taylor, and others, plus exciting bonus features, including the exclusive short movie "Mater And The Ghostlight," CARS is full of freewheeling fun for everyone.

Cars 2
Star racecar Lightning McQueen and the incomparable tow truck Mater take their friendship to exciting new places in "Cars 2" when they head overseas to compete in the first-ever World Grand Prix to determine the world's fastest car. But the road to the championship is filled with plenty of potholes, detours and hilarious surprises when Mater gets caught up in an intriguing adventure of his own: international espionage. Mater finds himself torn between assisting Lightning McQueen in the high-profile race and towing the line in a top-secret mission orchestrated by master British super spy Finn McMissile and the stunning rookie field spy Holley Shiftwell. Mater's action-packed journey leads him on an explosive chase through the streets of Japan and Europe, trailed by his friends and watched by the whole world. The fast-paced fun includes a colorful new all-car cast, complete with menacing villains and international racing competitors.

Cars 3
Blindsided by a new generation of blazing-fast racers, the legendary Lightning McQueen (voice of Owen Wilson) is suddenly pushed out of the sport he loves. To get back in the game, he will need the help of an eager young race technician, Cruz Ramirez, with her own plan to win, plus inspiration from the late Fabulous Hudson Hornet and a few unexpected turns. Proving that #95 isn't through yet will test the heart of a champion on Piston Cup Racing's biggest stage!