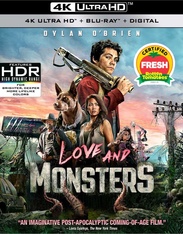 Dylan OBrien stars in this thrilling adventure delivering epic action and laughs. After monsters take over the world, Joel (OBrien, The Maze Runner) and the rest of humanity are forced to live underground. Believing hes lost everyone he has ever loved, Joel finds his high school sweetheart Aimee (Jessica Henwick, Game of Thrones) living just 80 miles away. Facing unknown dangers that stand in his way, Joel must discover his inner hero as he makes the impossible journey across a monster-infested land to be with the girl of his dreams. Also starring Michael Rooker (Guardians of the Galaxy) and Ariana Greenblatt (Avengers: Infinity War).

Rated PG-13 for action/violence, language and some suggestive material.