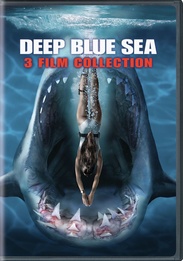 Deep Blue Sea 3 Deep Blue Sea 2 Van Etten, a pharmaceutical entrepreneur, tests drugs on bull sharks in hopes to extract their antibodies to cure human diseases. Before he can continue with his experiment, he tries to enlist Misty Calhoun, a shark conservationist, and other scientists to lead and endorse this project. The drug-enhanced sharks quickly begin to adapt and learn new hunting skills. The humans lose control over the laboratory and now they have to fight to survive. Deep Blue Sea Researchers on the undersea lab Aquatica have genetically altered the brains of captive sharks to develop a cure for Alzheimer's disease. There's an unexpected side effect: the critters got smarter . . . and meaner. Welcome to Little Happy, a tiny man-made island in the Mozambique Channel that's home to a flourishing nursery of marine life, where Great Whites come to mate and give birth every year. This peaceful conservatory is overseen by Emma Collins and her team of environmentalists, determined to continue her late father's legacy. This idyllic existence comes to an abrupt end, however, when Emma's ex-boyfriend arrives on the hunt for three bull sharks accused of butchering a half-dozen people. Their mother Bella was genetically engineered to be smarter and far more destructive. As the body count rises it becomes clear that Bella's offspring have inherited her enhancements, and if free to mate, will mark the end of life as we know it. Dive in for the deadliest, bloodiest return to the deep blue sea yet!