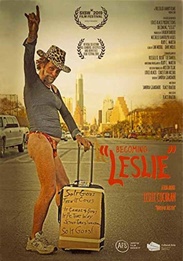 Told with unapologetic humor, BECOMING LESLIE is a portrait exploring the life of Albert Leslie Cochran - a cross-dressing misfit who drifted into the heart of Texas and became a beloved cult icon. On a three-wheeled bicycle hitched to a trailer, Leslie pedaled his way across the country from Miami, Florida only to land in the free-spirited city of Austin, Texas. While standing outside a grocery store and donning a bikini, the infuriated store management hosed him down. Never one to back down, Leslie single-handedly protested the store, thus igniting his activist career, and ironically began to shine a unique light on the pervasive treatment of the homeless. His fame quickly grew and he became a (wo)man of the people, known for speaking out about police accountability and people listened. Known only as Leslie, he became the most unlikely civic symbol of radical self-expression and free speech. After three mayoral races, Leslie meets artist and hairstylist Ruby Martin in 2005 who begins filming him in her beauty salon and they develop a friendship. She is captivated by his confidence and contradiction - the bearded face, breasts, flirty skirt and high heels. She is our guide into Leslies eccentric and troubled world, seeking to understand the complexity of the human condition through the life of a beloved yet polarizing icon. At the height of his fame, Leslie is suddenly found left for dead and the entire city is in shock. But as he triumphs over death, the real struggle begins as one mans efforts to preserve his changing identity are paralleled with that of a rapidly changing city. At its heart, BECOMING LESLIE offers an intimate look into a man searching for purpose, freedom, and a true place to call home.