Jack and Jill / Just Go with It / That's My Boy 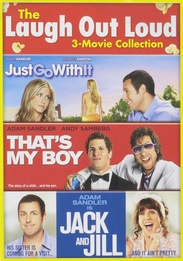 Jack Sadelstein (Adam Sandler), a successful advertising executive in Los Angeles with a beautiful wife (Katie Holmes) and kids, dreads one event each year: the holiday visit of his identical twin sister Jill (also Adam Sandler). Jills neediness and passive-aggressiveness are maddening to Jack, turning his normally tranquil life upside down. Things spin even more out of control for Jack when Jill decides to extend her visit-and he doesnt think that shell ever leave! ,While still in his teens, Donny (Adam Sandler) fathered a son, Todd (Andy Samberg), and raised him as a single parent until Todd's 18th birthday. Now, after not seeing each other for years, Todd's world comes crashing down on the eve of his wedding when an uninvited Donny suddenly shows up. Trying desperately to reconnect with his son, Donny is now forced to deal with the repercussions of his bad parenting skills. Co-starring Leighton Meester and featuring incredible cameos from a cavalcade of stars including Susan Sarandon, Vanilla Ice and James Caan. ,Danny Maccabee (Adam Sandler) meets the girl of his dreams (Brooklyn Decker) but has to enlist his loyal assistant Katherine (Jennifer Aniston) to pretend to be his soon-to-be ex-wife in order to cover up a careless lie. When more lies backfire, Katherines kids become involved, and everyone heads off to Hawaii for a ridiculous, out-of-control weekend that tests the limits of how far well go for love.

Jack and Jill
Just Go With It
That's My Boy