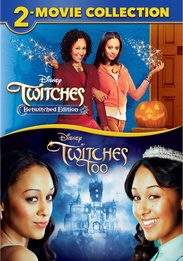 Twitches
Twin Girls With Very Different Lives Who Were Separated At Birth Discover Each Other's Existence And Their Real Identities As Witches. They Join Forces To Find And Free Their Real Mother.

Twitches Too
As twins born in the magical kingdom of Coventry and separated at birth in order to escape an evil force that could destroy them. When they are reunited on their 21st birthday, they discover their magical powers and the responsibility that comes with them.