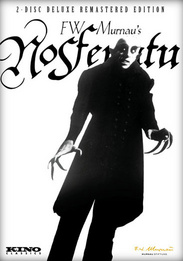 Originally released in 1922 as Nosferatu, Eine Symphonie Des Grauens, director F. W. Murnau's chilling and eerie unauthorized adaptation of Bram Stoker's Dracula is a silent masterpiece of terror which to this day is the most striking and frightening portrayal of the Bram Stoker legend. After it's premiere in 1922, Nosferatu was the subject of a lawsuit brought by Stoker's widow - who saw to it that any mention of Dracula was removed from the movie and that all "known" prints and negatives were destroyed. Most recently, this movie (and the eccentricities of actor Max Schreck) were the subject of the award winning movie Shadow of The Vampire.