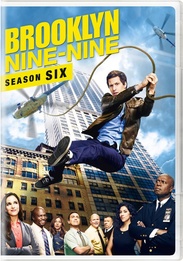 Brooklyn's finest and funniest police officers make their triumphant return in the sixth season of the critically-acclaimed and fan-adored comedy series. From Jake and Amy's romantic honeymoon... with Holt, a return to the glory days of Hitchcock and Scully, and Gina's hot moves and big news  the Nine-Nine is #goals. From Executive Producers Michael Schur and Dan Goor (The Office and Parks and Recreation) come all 18 hilarious, season six episodes of the Golden Globe® Award-winning Brooklyn Nine-Nine.