The Haunted Castle / Finances of the Grand Duke 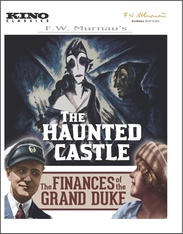 Before plumbing the depths of horror and despair with such films as Nosferatu (1922) and Faust (1926), Friedrich Wilhelm Murnau crafted a moody drama of a storm-bound manor and the grim mystery that Lurks within: The Haunted Castle (1921). A hunting party is interrupted by the arrival of a notorious Count (Lothar Mehnert), who is believed to have murdered his brother. The uninvited guest sets in motion an elaborate plot to resurrect the ghosts of the past and bring to light the dark secret that lies at the center of his brother's death. Breaking away from the dark, foreboding dramas for which he was becoming known, Murnau explored the realm of light comedy in a playful espionage thriller reminisent of Ernst Lubitsch: The Finances of the Grand Duke. Harry Liedtke stars as a "benevolent dictator" who must preserve the tiny nation of Abacco by fending off creditors, wooing a wealthy Russian princess (Mady Christians), and evading a band of demonic conspirators (including Nosferatu himself, Max Schreck).