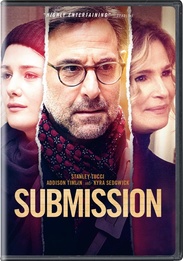 Featuring an acclaimed cast headed by Stanley Tucci, Kyra Sedgwick and Addison Timlin, Submission is about lust, desire, and what happens when a professor gets entangled with a seductive student. Ted Swenson (Tucci) is a struggling author who teaches writing at a small liberal arts college. He is discontent in his marriage to Sherrie (Sedgwick), drinks too much, dislikes his colleagues and is uninspired by his students. That is until the charming student, Angela (Timlin), shows up in class. Ted begins focusing on nurturing her career, but it's only time before lines are crossed and it becomes unclear whether Ted is predator or prey and Angela is victim or victimizer.