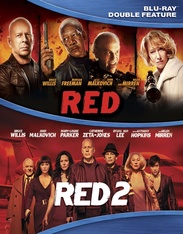 RED: Frank (Willis) is a former black-ops CIA agent living a quiet life alone...until the day a hit squad shows up to kill him. With his identity compromised, Frank reassembles his old team - Joe (Freeman), Marvin (Malkovich), and Victoria (Mirren) - and sets out to prove that they still have a few tricks up their sleeves. Stand back and watch the bullets fly in this explosive action-comedy.

RED 2: In RED 2, the high-octane action-comedy sequel to the worldwide sleeper hit, retired black-ops CIA agent Frank Moses (Bruce Willis) reunites his unlikely team of elite operatives for a global quest to track down a missing, next-generation lethal device that can change the balance of world power. To succeed, they'll need to survive an army of relentless assassins, ruthless terrorists, and power-crazed government officials, all eager to get their hands on the superweapon.