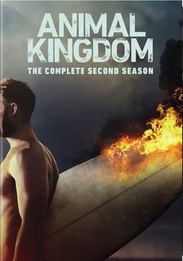 Season Two explodes into action with the brash Cody bad boys in the midst of a high-adrenaline heist. But their haul is a dud, and the frustrated brothers rebel against their all-controlling mother, Smurf...as well as each other. An external threat from Smurf's past adds to the chaos, jeopardizing her position of power. As J graduates from high school, his grandmother presents him with an awesome gift and ominous responsibility. By the 13th episode, one Cody will be in prison and another one left for dead. It's shocking what mind games, backstabbing and lies can do to a relatively normal Southern California crime family. Ellen Barkin captivates as the manipulative matriarch who specializes in hard-core family values and a love so tough it can kill.