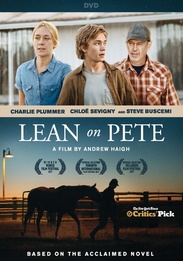 Fifteen-year-old Charley (Charlie Plummer) finds acceptance and camaraderie at a local racetrack where he lands a job caring for an aging Quarter Horse named Lean on Pete. The horse's gruff owner, Del Montgomery (Steve Buscemi), and his seasoned jockey, Bonnie (ChloÃ© Sevigny), help Charley fill the void of his absent father. But when Charley discovers that Pete is bound for slaughter, he takes extreme mesures to save him, as Charley and Pete embark on an unforgettable odyssey to find a place they can call home.

Released by Lionsgate and A24 Films. See more credits.