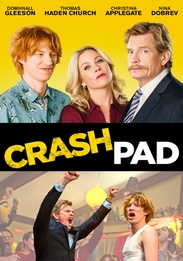 A hopeless romantic (Domhnall Gleeson) thinks he's found true love with an older woman (Christina Applegate) only to learn that she's married and their encounter was merely an instrument of revenge against her neglectful husband (Thomas Haden Church). Initially out for blood, the husband finds himself strangely sympathetic to the romantic's plight and decides the best way for the two of them to get revenge is by moving in together, cutting her out and living the bachelor life.