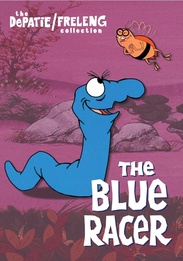 Unlike Warner Bros. Cartoons iconic Road Runner, nothing about DePatie-Freleng's supersonic Blue Racer could be described as streamlined. This listing reptile, while surely speedy, definitely is not slick and ranks as more of an Everysnake who loses more battles than he wins, most of them to a philosophical Japanese Beetle. The DePatie-Freleng artists, while dubious acknowledgists, still displayed their knack for extended physical comedy and squash-and-stretch action scenes in this surprisingly popular scheme that bucked the contemporaneous trend toward limited animation. Never consigned to any indigenous natural habitat, Blue Racer vacations in Tokyo, winters in Alaska, even emigrates to Ireland with a wanderlust echoed by the film's producers, who outsourced one of the entries to Sydney, Australia and another to Barcelona, Spain.