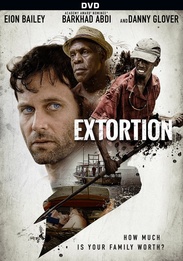 At a Caribbean resort, Kevin Riley (Eion Bailey, "Ray Donovan") and his family take a carefree boat ride that turns tragic when they're stranded on an island. Near death, they're rescued by a local fisherman (Barkhad Abdi, CAPTAIN PHILLIPS) who demands a million dollars, then vanishes. Riley must race to find his dying wife (Bethany Joy Lenz, "Dexter") and son on an unknown island before their time runs out. Also starring Danny Glover (SAW), EXTORTION shows that even paradise can be deadly.