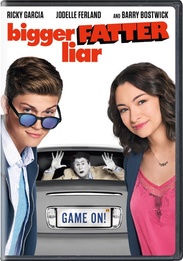 Kevin Shepherd (Ricky Garcia) has gotten away with lying his entire life, but when scheming producer Larry Wolf (Barry Bostwick) steals Kevin's idea for a hot new video game, the tables get turned. Kevin realizes he's met his match, a Bigger Fatter Liar, when Wolf refuses to admit the truth. Kevin declares, "game on," as he and his best friend Becca (Jodelle Ferland) stop at nothing to get Wolf to tell the truth, plotting a series of devious pranks to set the record straight. Get ready for crazy hijinks and big laughs in this hilarious comedy!