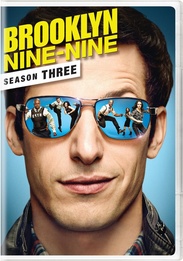 Brooklyn's finest are back and better than ever! Detective Jake Peralta (Andy Samberg) is on a mission to be the "most amazing detective-slash-genius" ever. The season is full of shake ups and shenanigans as the crew deals with a new boss, suspicious romances, a badly planned "babymoon," undercover mayhem and outrageously funny body cam shots. From Dan Goor and Mike Schur (The Office and Parks and Recreation) come all 23 riotous, season three episodes of the Golden Globe® Award-winning Brooklyn Nine-Nine.